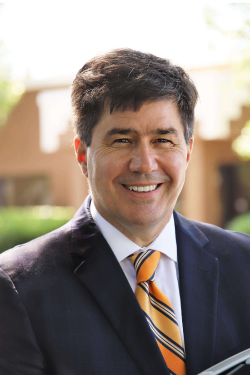 James L. D’Andrea is a Board-Certified Civil Trial Lawyer and a Shareholder in the firm. He considers it a privilege to be a trial lawyer and would list his opponents as his best references.

As a veteran civil litigator, Jim has specialized in transportation defense and risk management in the railroad, maritime, crew transport and trucking industries, as well as doing regular defense work in construction defect, franchisor liability and products liability cases. He serves regularly as local counsel for clients referred by out-of–state and national counsel, and often works as trial counsel at the request of colleagues in Florida.

He tries cases in state and federal courts, and has briefed and argued appeals in state, federal and administrative forums.

Jim graduated from Miami University in Oxford Ohio in 1982, then worked as a journalist and public relations executive before attending the University of Florida College of Law. He was admitted to The Florida Bar in 1992 and is admitted to practice in the U.S. District Courts for the Middle, Northern and Southern Districts of Florida and the United States Court of Appeals for the Eleventh Circuit.

Jim holds an “AV Preeminent” Peer Review rating from Martindale-Hubbell. In 2009 he was elected into the American Board of Trial Advocates (ABOTA), an invitation-only national organization of plaintiff and defense attorneys dedicated to the preservation of the right to trial by jury guaranteed under the Seventh Amendment to the U.S. Constitution. He was awarded the Jacksonville ABOTA Chapter’s Professionalism and Civility Award in 2014, joined its Executive Committee in 2015 and served as the Jacksonville Chapter President in 2019.

Jim was a proctor in admiralty of the Maritime Law Association and a member of the Southeastern Admiralty Law Institute. He previously served as an officer of the Jacksonville Catholic Lawyers Guild and for years chaired the Morningstar School Board of Directors for the Diocese of St. Augustine.

Jim and his wife Kate have three children. They live in Jacksonville, where Kate works as general counsel at Mayport Naval Station.